Visualizing biology: from conception to birth, cell division, and more

Visualization helps in learning anything. In biology visualization has traditionally been done using pictures or posters (right).

From conception to birth. But that is so 1970s. In the technocratic future, where lullabies are delivered via iPod and iPads are norm in kindergarten, figures or posters wond do any good. Kids would hate to learn from static images….they need videos! And if you are making videos, you might as well use real data…and Alexander Tsiaras does exactly that. Using advanced technology on real pregnant women he captures images of life from conception to birth. Mes merizing!

Future of Education: ONLINE, FREE, and with CHANCES OF JOBS IN LEADING COMPANIES! 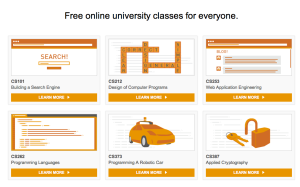 Many years ago (2003), Steve Robison, then co-ordinator of the Associated Students of College of San Mateo (ASCSM) told me about his dream of establishing a free and self-sustaining university. His envisioned students practicing what they learn in classes to support the campus community thus making it sustainable. For example, culinary students will prepare meals, horticulturalists/botanists will maintain the gardens, architects will design new buildings and so on. At that time this idea of free education seemed a distant possibility.

But now, free education is the new trend. Unlike Steve’s model of a physically existing self-sustaining university, a few successful free ‘universities’ have emerged over the internet. Salman Khan’s Khan Academy definitely led the way by providing free and easy to understand tutorials over the internet. His materials were so awesome that Bill Gates announced he was a huge fan on national TV. MIT has been offering free online classes over the internet for a number of years and recently MIT has launched MITx, a program that provides students with “the opportunity to demonstrate their mastery of the material and earn a certificate from MITx” for a class titled Circuits and Electronics.

Being originally from Nepal, a country that suffers severe higher secondary education bottleneck, I became very excited when I first heard of MITx. So I tweeted it and put it as my facebook status. But I was thrilled to hear that MITx was not the first online university and two artificial intelligence professors at Standford are doing something even better!

Sebastian Thrun and Peter Norvig heard Salman Khan give a talk at TED and launched their own academy at Stanford which is now becoming Udacity, a free university to learn computer programming language and artificial intelligence. The best thing about Udacity is that if you are the top student in their classes you may have a job waiting for you in the leading industries in the world.

What does Udacity mean to students in the US?
I think this is a revolution in education. For hundreds of years many students have tried to buy university brand names by paying thousands of dollars in tuition. The higher the brand name of an University, higher the tuition fees. Two incentives to pay such outrageous fees are: the university name and networking with the alumni. Third minor incentive is the quality of education. Ultimately, the hopes of new graduates is to land a good job in a leading company. Unfortunately, none of the Universities care if you do not get a job. Once you graduate (and pay all the fees without which you dont graduate), the only correspondence you get is from alumni association asking for donation.

The cool thing about Udacity is that instead of earning money from student tuition, they make their money by helping students get a job. According to Wired, this is how it works: large companies pay 10-30% of an engineers’ first year salary to employment agencies. Udacity may generate most of their income from such companies by helping their top student obtain jobs. So, the education is free but money to run the university comes from top multibillion dollar companies. This cannot get more sweeter.

What does Udacity mean to the world?
If the world’s smartest person was born in a remote village in the middle of a mountain, (s)he may never realize her/his potential because the opportunity to learn is so little. Even if we imagine a 100% literate world, lack of high schools and universities forces many intelligent students worldwide to choose jobs that is far below their potential. Only a few lucky ones with enough collateral get visas to come to a developed country for higher education. Thus we are wasting talent with current educational model.

In theory, universities such as Udacity revolutionize education for the brilliant students in every corner of the world. Even if you were born in Mustang, a remotest state in the Himalayas, you can be taking a class in artificial intelligence and be admired by two best AI experts in the world. If you excel companies such as Google may be vying to hire you to design a driverless car. This is not a distant possibility; this is a commonplace at Udacity. Hence, it is an educational revolution.

A simple to do list
Industrial revolution wedged a huge gap between the developed and developing nations. Internet revolution will forge a bigger gap if developing nations do not act now. Those nations that have nationwide internet service will benefit by incorporating internet in economics, communication, media, and education. Merchants in the developing countries with internet will be communicating globally and trading in dollars, whereas those in countries will be wasting their goods because they cannot sell all of it locally. More importantly, students in the countries will be using internet to learn about Salman Khans and Bill Gateses and interacting with Sebastian Thruns and Peter Norvigs and aspiring to land jobs in Googles and Bidus. Those in countries without internet will be struggling to find inspirations from their corrupt local leaders. Yes building internet infrastructure is expensive but since mobile phones are becoming increasing popular, investing in broadband services to increase internet users is a must for developing nations.

I have no faith in the corrupt politicians of developing countries; hence I do not expect the narrow-minded government depleted of visionary leaders to bring any positive changes in near future. Also, most NGOs are top heavy (spending 70% of their budget paying their executive staff) and can do little. The most important constituents to bring any change will be local entrepreneurs. Providing grants or microloans to encourage educators and businessmen to incorporate internet in their daily lives may bring innovative methods of increasing internet use in developing countries. For example, Mahabir Pun, a Raymond Magsaysay awardee has incorporated internet in education, animal breeding, monitoring global warming, and tele-medecine (more on Pun’s work).

Khan Academy and Udacity are not only great resources for youth and students worldwide but Udacity’s model of harvesting talent from all corners of the world can also be beneficial for companies. Hence, large companies should explore the opportunities of investing in internet infrastructure in developing nations because it is in their interest to find hidden talents and hire them. May be there are Marc Zuckerbergs and Sergey Brins somewhere in the Sahara desert in Chad and the mountains of Nepal, with 1.8% and 7% internet users respectively.

Another example of ERV’s role in evolution

To end a royal dynasty, one has to eliminate its generals: this was the lesson of a Chinese movie I once watched in Netflix. Similar strategy is adopted by ERVs.
In a recent Plos Biology article (click here for a good summary for general audience) the authors identify MAVS, a protein produced by mitochondria (the general) that ignites immune response to protect the human cell (the Royalty) from Hepatitis-C virus (HCV). Three unrelated primates have the exact same non-synonymous mutation in the MAVS gene that  potentially alters the protein’s structure making it untouchable by the HCV particles. Unfortunately, humans, the primary host of HCV, do not have that mutation thus are relatively easily conquered by HCV. Sucks!
VERY INTERESTING is the presence of that same mutation in three different species: the authors apparently conclude it is a convergent evolution. However, this finding is in stark contrast with studies in yeast where convergence occurred at genic and network level but not at SNP level. Also, population genetics theories also find it very unlikely. Think about it, what is the probability that exactly same mutation would occur in three species branch AND SNP gets selected in all three branches? MINISCULE.
Could it be more plausible that the particular mutation existed in low frequencies in the common ancestor of all the primates and was readily available in all three branches at the time HCV like virus was active and quickly got fixed in the population? That particular virus probably did not infect humans (and other primates that do not have them) so they lost the mutaiton due to drift. Just a thought…