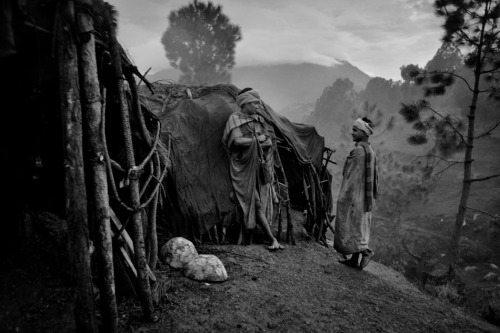 This picture belongs to Kishore K. Sharma, an awesome Nepali photographer. Please do visit his blog by clicking on this picture to view more pictures of the Rautes.

Human inhabitation of the Himalayan foothills, known as present day Nepal, predates the dawn of civilization and the Gopalavamshis because prehistoric stone tools of “Patu industry,” a non-agricultural Mesothilic culture unique to Nepal were recovered in Central Nepal[1]. Two distinct types of tools, the Patu tools resembling the 10-12 thousand years old Hoabinhian culture and another resembling 10-30 thousand years old culture in India highlight three important points about ancient Nepali history: first, modern day Nepal has been inhabited by humans since the Pleistocene; second, Nepal has been cosmopolitan even in the Mesolithic harboring Indian and South East Asian cultures, and finally, the Patu people had an unique cultural identity by the Mesolithic.

But what happened to the Patu people? It is curious that a few nomadic hunter-gatherer tribes live/until recently lived the Mesolithic lifestyle in central Nepal, where the “Patu industry” once existed. Could they be the descendants of the Mesothilic humans that developed the first Himalayan culture?

Kusundas (aka Myahak, Ban Rajas) and Chepangs (aka Prajas) are one of the highly marginalized tribes in Nepal. Until a few decades ago both these tribes were nomadic hunter-gatherers. With forests gone, Kusundas were forced to desert their nomadic life and enter villages, which caused annihilation of their culture, traditions, and languages. Only a few Kusundas today, speak their native language. Like the Kusundas, Chepangs were also nomadic hunters and gatherers in central Nepal. Destruction of forests has forced Chepangs to adopt a semi-nomadic life in the non-yielding slopes of the Mahabharat range. 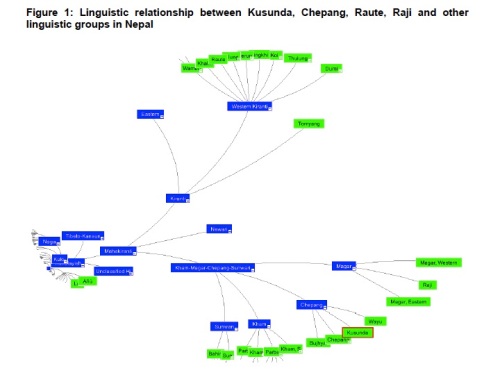 In addition to their hunter-gatherer lifestyles, linguistic and anthropological evidence suggest that Kusundas and Chepangs have been living in central Nepal since ancient times. Both the Kusundas and the Chepangs were officially first reported by B.H. Hodgson, a British naturalist and ethnologist in mid-nineteenth century, as “broken tribes” living nearly “in a state of nature” and carrying bows and arrows with no relationship with the rest of the “civilized races” of the country[2]. Later CJF Forbes found more plausible relationship between Chepangs and Khyens (Kiiyen) and Kumis of Arakan hills in Burma (Myanmar) and even concluded that Chepangs may have entered Nepal from the east [3]. Unlike Chepang, Kusunda language is difficult to classify as it similarities with various unrelated language groups such as Austro-Asiatic (Munda)[4], Tibeto-Burman, and even Indo-Pacific[5]. It is now widely recognized as a language isolate[6]: a language distinct from all other languages spoken in Nepal.

Although both Chepang and Kusunda languages seem to be unrelated to any other languages in Nepal, they appear to be linguistically closely related to each other (see Figure1). It is plausible that Chepangs and Kusundas have cohabited the Mahabharata hills and centuries of linguistic exchange may have resulted in their language similarities. Furthermore, anthropological evidence seems to corroborate the linguistic antiquity between these tribes, for example, both the Kusundas and the Chepangs have a folk legend according to which the Kusundas are the descendants of Kusa (thus the name Kusunda) and Chepangs are the descendants of Lava, both the sons of Rama and Sita of the Ramayana. Furthermore, interviews with Chepang traditional healers and medicine men revealed hundreds of plants used for diverse purposes and many of them were previously not documented.[7] The tremendous ethno-botanical knowledge of the Chepangs further substantiates their occupation of central Himalayas since ancient times for such knowledge of local flora can only be built with time. Hence, Kusundas and Chepangs, by virtue of their nomadic life styles and lack of linguistic affinities with any other languages of Nepal, may have inhabited the Himalayan foothills long before other ethnicities emigrated.

Recently, genomics has been used to infer the demographic histories of human populations throughout the world. Analysis of Kusunda genome in a recent issue of Science[8] supports some of the linguistic evidence and indicates that Kusundas are related to Tibeto-Burman speaking North East-Asian populations such as Hezhens, Oroqens and Mongolians but are not related to the Australian or Papuan Aborigines and virtually unrelated to any of the human populations from East or South Asia. Remarkably, a Kusunda specific genetic component is evident; however, without further analysis it is difficult to determine whether this component is due to long period of population isolation or due to ancient age of the population.

Genetic and linguistic evidence argues that Kusundas are possibly the most ancient of Nepali populations. They , may have come into contact with Mundas and Burmese in Eastern Himalayan foothills in ancient times. Words burrowed from these languages may have remained in Kusunda language to date. However, more work is needed to determine whether the Kusunda specific genetic components are a result of recent inbreeding due to population isolation or whether they are archaic genome components due to Kusundas’ antiquity in the Himalayan foothills.

Although it is tempting to crown Kusundas as the eldest peoples of Nepal, other nomadic/semi-nomadic tribes of central Nepal cannot be ignored. Genetic analysis of Chepangs may show that they have also cohabited the Mahabharata hills for centuries. It is also noteworthy that many other tribes along with Kusundas and Chepangs may have inhabited central Nepal since ancient times. For example, the Tharus may be descendants of inhabitants of the Terai since the Paleolithic. Tremendous ethnic and cultural diversity within Tharus that spread throughout the Terai region attest their occupation of the land for centuries. However, it is interesting that there is little linguistic similarity between the Tharus and the hunter-gatherers of central Nepal suggesting that there may have been very little interactions between the populations of the hills and that of the plains. Furthermore, Rautes that are still nomadic and Rajis that recently gave up nomadic lifestyle may have resided in central Nepal before the advent of agriculture. Many more ethnicities of Nepal may have inhabited the Himalayan foothills since ancient times but little is known about them. Hence, it is really important to investigate the history of all the peoples of Nepal for accurate presentation of Nepali history and their origins as such studies are also interesting from the perspectives of human evolution. Himalayas are believed to have acted as a barrier for gene flow between the Indian subcontinent and Central Asia. However, the fertile Himalayan foothills with diverse flora and fauna may have been a Mesolithic melting pot for migrants from both the sides of the Himalayas since Mesolithic times. Understanding the origins and demographic histories of present tribes of Nepal may reveal novel aspects of ancient human dynamics in Asia.

In summary, there is abundant evidence that present day Nepal was inhabited by humans since the Paleolithic and a culture unique to Nepal existed by Mesolithic. It is possible that hunter-gatherer populations currently residing in central Nepal, such as Kusundas, Chepangs, Rautes, and Rajis may be the descendents of the Patu people that developed the first culture of Nepal some 7000 years ago. There is a dire need for additional archeological, anthropological, linguistic, and genomic studies to understand the ancient history of Nepal accurately.

[6] Watters, D. (2005) Notes on Kusunda grammar (a language isolate of Nepal). Kathmandu: National Foundation for the Development of Indigenous Nationalities.

[7] Rijal A. 2011. Surviving on knowledge: ethnobotany of Chepang community from midhills of Nepal. Ethnobotany Res Appl 9:181-215.

Google’s ngram allows anyone to mine English textbooks scanned by Google to track dynamics of words in the Western world since 1500AD. I decided to spend this Sunday afternoon to mine English textbooks to learn about history of knowledge of Nepal in the West. It is apparent that India (1520AD) and China (1570) were known to the Western world at least 200 years before Nepal (not mentioned until 1680).

Father Guillespie (Read Father Guillespie’s account of Prithvi Narayan Shah’s acquisition of Lalitpur form 1795AD), probably one of the first to write about Nepal mentions a road via Macwanpur (Makwanpur) leads to Nepal, an “ancient and independent” country, from India. In his account he mentions that Nepal has three principle cities: Cathmanda (Kathmandu) which extends to Thibet(Tibet), Lelit Pattan which borders Macwanpur, and the third city of Bhatgan (Bhaktapur) which borders Ceratas (Kirantas). He also mentions Timi (Thimi) and Cipoli (Siphal may be??) as two small towns. Father Gillespie claims to have witnessed the defeat of the king of Patan,  Gainprejas  by Gorc’ha king Prithvi Narayan Shah. Gillespie writes that Gainprejas paid his soldiers by digging the Treasures of Tolu, which was possessed by Prithvi Narayan Shah upon winning the battle. He claims he saw the treasure that Shah acquired.

Gillespies appears to exaggerate and fantasize about Nepal and portray it as a barbaric and exotic nation. For example, Father Guillespie mentions two religions practiced in Nepal (Kathmandu valley): Baryesu, a religion of Tibetan origins whose practitioners “pluck out all the hair from their heads” and Hindu religion “practiced in its greatest purity” which was adulterated by Mohammedans in India. Hence, his account should not be taken as a historical fact; however it is fascinating to read a document about Nepal in English, from 1700s.  A few memorable mentions from Gillespie are Banga, a castle 3 miles west of Lelit Pattan (not sure if this castle still exists) and the statue of Budhanilkantha. Another book from 1750, Memoir of a Map of Hindoostan also mentions Srinagar, Nepal, and Morung  as countries indepent of Tibet. Hence, these two articles from 1700s appear to corroborate at lest two facts about Nepal:  existence of Limbuwan in the east of Bhaktapur and existence of Morong as a state described by Iman Singh Chemjong in Kirantkalin Vijaypurko Sankshipta Itihaasa (1975). Awesome!!!

Currently, there is a considerable debate on whether Prithvi Narayan Shah unified Nepal or expanded Gorkha and whether he should be viewed in a positive or a negative light. In A view of the rise, progress, and present state of the English Government in Bengal (1772) a Governor of Bengal writes that Rajah of Nepal repeatedly pressed the English to send military aid. This is the time Prithvi Narayan Shah attached Kathmandu valley which again corroborates Iman Singh Chemjong‘s description of Gorkhali attacks in the Valley (Kirantkalin Vijaypurko Sankshipta Itihaasa (1975)). Furthermore, the Governor writes of an “advantageous trade” with Nepal “by which a considerable quantity of gold, and many other valuables were imported. The Rajan being now dispossessed of his country…by the Rajah of Goercullah (Gorkha) the usual channel of commerce has in consequence been obstructed.” This suggests Prithvi Narayah Shah stopped export of riches of the Kathmandu to the English; hence those who view his capture of the valley negatively should reconsider their views.

In summary ngram can be a valuable tool for scholars, both in Nepal and in the West to study history of ancient Nepal. For example, Francis Hamilton’s  An account of the Kingdom of Nepal documents the details of Kirants in 1819 which is similar to Limbuwan’s history in Iman Singh Chemjong‘s  Kirantkalin Vijaypurko Sankshipta Itihaasa (1975). Also, there may be valuable old resources that have been masked by a surge of recent documents that may shed more light on history of Nepal.

Filed under My Life My Thoughts, Nepal